This article originally appeared on Renal and Urology News. 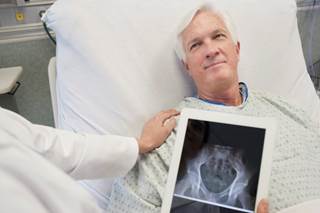 In a recently published study, external beam radiation therapy for localized prostate cancer was associated with a 35% increased risk of bladder cancer compared with radical prostatectomy.

External beam radiation therapy (EBRT) for prostate cancer is associated with a greater risk of a bladder cancer compared with radical prostatectomy (RP), according to a new study.

In a study of 84,397 men older than 65 years with localized prostate cancer (PCa) treated either with EBRT or RP from 1988 to 2009, investigators examined the risk of a second primary pelvic cancer (bladder and/or rectal cancer). The 5- and 10-year cumulative incidence rates of a primary bladder cancer were 1.26% and 2.34%, respectively, for EBRT recipients compared with 0.75% and 1.63%, respectively, for RP patients.

“This information should be discussed during the counseling of clinically localized PCa patients during the decision making regarding RP versus EBRT,” Dr Moschini and his colleagues concluded.

The study found no significant difference in the risk of rectal cancer between the treatment modalities.

The investigators identified their study population using the Surveillance, Epidemiology and End Results (SEER)-Medicare database. Of the 84,397 patients, 51,145 and 33,252 underwent EBRT and RP, respectively. The EBRT group was older than the RP group (median 74 vs 69 years). The median follow-up was 69 months, during which 1236 primary bladder cancers and 432 primary rectal cancers were diagnosed.

Where Have All the T Cells Gone?